The King is having fun

FIRST EDITION of this piece that will inspire the opera Rigoletto to Giuseppe Verdi.

Frontispiece composed of a vignette by Tony Johannot, engraved by Andrew, Leloir and Best and printed on China.

Performed for the first time in Paris on November 22, 1832 at the Comédie-Française, The King is having fun falls victim to censorship the very next day:
"The appearance of this drama in the theater gave rise to an unprecedented ministerial act. The day after the first performance, the author received from M. Jouslin de la Salle, director of the Stage at the Théâtre-Français, the following ticket, the original of which he keeps preciously: "It is half past ten and I am immediately ordered to suspend the performances of Le Roi s'amuse. It is Mr. Taylor who communicates this order to me on behalf of the Minister. This 23rd of November "" (Preface).

Hugo, will sue the government by way of a complaint to the Commercial Court against the Comédie Française for breach of contract. The hearing on December 10 was a truly dramatic performance:"Throughout the entire audience, this agitated crowd was still in the audience of the French, on the day of the first performance of their favourite poet. It was indeed, the same rumour, the same vociferous noise [...]. The arrival of Mr. Victor Hugo was greeted by a round of applause. The poet seemed more embarrassed than flattered by this ovation." (Court Gazette, December 20.)
Hugo loses his case and refuses to appeal. The play was not finally performed until fifty years later, on November 22, 1882 at the Théâtre Français.

VERY BEAUTIFUL EXAMPLE without freckles, finely bound by Victor Champs (1844-1912) at the end of the 19th century.

Black long grain half maroon with corners signed Champs, back decorated with frames and fleurons, Cover not preserved. 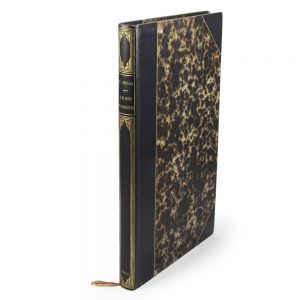