RARE AUTOGRAPH LETTERS addressed to the art critic of Polish origin, promoter of the symbolist movement Teodor of Wyzewa (1862-1917).

Written in the summer of 1887, they precede the poet's death by a few weeks. Laforgue, without money, tries to have his last prose work published: Berlin. He meets Gustave de Malherbe, director of the Quantin publishing house, thanks to the recommendations of Theodore Wyzema.

"On Wednesday, my dear fellow, I went to Quantin's this morning. De Malherbe received me most kindly. (I still owe you that). He'll give me an answer on Monday. You can imagine that I received nothing from Dujardin. I don't understand anything about it. He can't imagine the expectations of... Your friend Jules Laforgue".

"Friday, My dear friend, Truly you have given me the duty to send you such letters. It was on your recommendation that De Malheurve told me when I handed in my manuscript: "The book won't be published until October. But materially for you it will be as if it appeared today". On that, he sent me back to Monday. On Monday he was happy, but I had to see Mr. May, and he sent me back to Wednesday; on Wednesday I got a letter back to today (a letter) and today I got nothing. And today everything that falls on my head today falls on my head on the fifteenth of term. This is what I wanted to tell you. It is impossible for me to despair of my book at Quantin after De Malherbe's promises, I will have money on that side. But you've got an easygoing relationship with Rzewsky. Well, it's not a loan that I would like to make from him, but a loan that would be erased as soon as I've touched at De Malherbes, or - in case of misfortune - I hoped at Lemerre. (It would be about 380 which I would need) (...) Goodbye my true and rare friend. For months I have been thinking, impotent, what I could do for you, and I have still only found this palpable thing that I have never since thought of saying to you: Dedicate to you the news that Dujardin will publish. This proposal results in an absence of package. Goodbye, your Jules Laforgue." 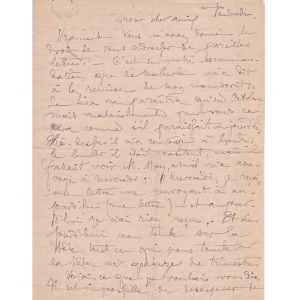