4 signed autograph letters and a signed typewritten contract for the film " The Vines of the Lord« .
Rare together.

4 signed autograph letters and a signed typewritten contract for the film "The Vines of the Lord".

About the making of the film The law is the law by Christian-Jaque shot in Italy and released in cinemas on September 17, 1958. 2 pages on a 220 x 280 mm sheet, letterhead of the Hotel Florida in Cassino, Italy :

"Cassino, November 19, 1957
My dear Ernest,
This word in a hurry to answer your letter of the 13th in the current.
I am pleased to note that our "Unemployed" is continuing a career in Belgium that had led to the departure of a prolongation, which I hope will be even longer.
As far as I'm concerned the veto the days at six o'clock to leave in the mountain, I forgot all comfort and joy, we return in the evening around 6 p.m. but alas, this neither in Millreroses, nor in Carry, in Cassimo city destroyed at 100 % and rebuilt we are a little isolated from everything and the kindness of the inhabitants and the manager of the hotel (where I occupy the only room with bathroom) makes me forget this forced stay of 5 weeks, if all goes well, but still regret the pleasant hours, the meals, the friendship and the sun of Velaux, that said, the film will be, I think, great and Anousckini is a great guy, as for Christian-Jaque we are too old friends to disagree on everything, there is also the Fernandel retournage atmosphere where laughter is king, finally. I'm waiting and I'm filming while I'm waiting for my entr'acte for the parties in Marseilles.
Between us, a letter from [Georges] Liron, lets me know that the situation of our friend is not very brilliant as far as what he has been told, and that he is in the process of examining the proposals that could be made to me, In virtue of the past agreements, you must admit that it is rather paradoxical, it seems that it is I, who am his debtor, not to speak to anyone about all this, but I wanted to inform you about it, so that you can feel the ground outside of Liron.
I realize that my word has lengthened and that their past, It is exactly 7:10 am and I will leave for my border village of Vernafro to practice my job as a customs officer, one more !!!
Friendship all around you, and affectionately, Fernandel."

About the aborted scenario of Clochemerle-les-Bains which was to follow the Unemployed from Clochemerle directed by Jean Boyer in 1957 with Ernest Rupp as Production Manager. Gabriel Chevalier finally made it into a novel published in 1963.
3 pages on two sheets 212 x 300 mm, on the letterhead of the hotel les Milleroses in Marseille :

"Sept. 28, 1958.
My dear Ernest,
Before leaving to vote, I am writing to you after having carefully read the first draft of Clochemerle-les-Bains. Unfortunately, I cannot give you my acceptance to shoot this subject and I believe that it is useless to make Jean and Chevalier work next month on a non-existent script and spend money for nothing, In my opinion there is only the title of commercial, personally, I do not want to do this continuation at all because I do not see the benefit that I could get from it both from a standing' and financial point of view, when I do not feel something I must not insist, of course, this is not a cop-out and I leave it to you to keep or abandon the date of the end of May. I will need your answer when I return to Paris.
With affectionate regards.
Fernandel.

This is followed by the autograph manuscript of the script commentary:

Sunday 10 a.m.
About Clochemerle-les-Bains
Reading the continuity I wanted at first to make me a favorable opinion, despite my good will, I did not arrive and yet Jean, in our conversation after his descent from the train, had attended on the story Alba draws around this summary and that I should not, therefore, make a final decision before having read the entire work that was to begin upon his return with Gabriel Chevallier. I was of his opinion before reading it, now I no longer agree. Here are the reasons why:
Allah first images of the film we see Tistin and the baby (nothing new) scene of the good in the unemployed who repeats itself in much less funny, it is a detail you tell me, but that is of great importance for a second mount, continues, we learn later that Jeannette died. Easy enough to get rid of a character must we need more, and a little painful. Then we see Tistin again in the village and at the café chased by the quolibets of the inhabitants, an existing scene in the unemployed man who brings nothing new but a pale copy of the first film. Thus with Beausoleil Babette etc.. They didn't make me smile and we get to the story of the source. I'll skip the explanations of water and wine to get to the second part of the scenario Tistin disappears. When I say disappears, it is that he leaves his line of Bell to take a serious tone that no longer corresponds to the title of this poor unemployed, truculent, friendly, funny and even poetic, becomes a "gentleman" who has succeeded (what implausibility, with what?) with a guarded fantasy, 'he can not keep the nature of his first character and who looks much more like Mario de Coiffeur pour Dames than has Tistin the "Unemployed".
To finish, there was this in our first film: a guy who doesn't work registers for unemployment and after the adventures gets the work medal, 4 or 5 scenes, good dialogue and a climate. In the second one, there's nothing and I can't trust Chevallier completely, because I won't be there to discuss my point of view, which is, most certainly, different from his."

Fernandel criticizes the scenario of "La Belle Américaine"and prefers to return it to the producer. The film was finally shot and released in 1961, with Louis de Funès playing the lead role.
1 page (136 x 210 mm) Fernandel letterhead :

"Capvery, August 31, 1958
My dear Ernest,
I have just finished reading the script "La Belle Américaine" and I hasten to give you my opinion it is not favorable, I knew in advance that it was burlesque and I expected to find, with the departure, gags more likely than the subject, however, there is nothing except some funny scenes for the comrades and the situation, rarely for the lead role. The story of the car trunk only imports effects to those around, the elegance contest and for the female role, as for the story of the embassy It looks like beginning rise what I had with Nadia Gray in Sénéchal, he met with the chairman of the board is unplayable, one cannot, moreover, ridicule a head of government. That is in all sincerity what I think of this subject, which I am turning over to your office.
With affectionate regards. Fernandel"

Typewritten contract (4 pages on 4 sheets of 210 x 270 mm) for the lead in the film."The Vines of the Lord" from the play by Robert de Flers and Francis de Croisset. This is the copy of the producer Ernest Rupp's play with on each page Fernandel's autograph signature.
Directed by Jean Boyer, "The Vines of the Lord"The album, which was released on May 27th 1958, took eight weeks to complete, with Fernandel, Pierre Aux and Simone Valère alongside Fernandel.
According to Fernandel, who addresses the subject in the following letter, the financial terms of the commitment, 29 million francs plus a further 20 million francs, would be particularly advantageous.
2 pages on a 185 x 265 mm sheet, on letterhead of the Weldorf-Astoria Hotel, the Tower New-York :

"New-You May 6, 1959
My dear Ernest,
After a triumphant tour, but how tiring, here I am back in New York since 8 o'clock this morning, where I have to meet many more people before leaving America tomorrow at noon via Flanders, if the sea is beautiful I will be able to rest.
The day before my departure I met Tenoudji, I wanted to make the film I was going to shoot with Bernard Bordérie, after an interview with Liron I told him not to go ahead with it because Fenoudji wanted to sign with me under the same conditions as for "Vignes", he was within his rights not to pay the conditions requested by me first and then by Liron because personally I hadn't asked him for anything, the only thing that I find annoying is that he has the contract for the Vines in his hands and that everyone can consult it, i.e. be aware of a special price that I had only agreed to with you, are right about our friendship. I ask you to tell Tenoudji that this contract has been accepted monthly for you alone and that if you had not been co-producer in this case Morguestern or another would never have decided to sign me under these conditions. That said, I am making the film with Raymond Borderie at my usual price.
There are four films of mine New York right now, I think I'm going to move there to fish in the Hudson, still, what a beautiful country France is.
Give my regards to the three of you.
Fernandel." 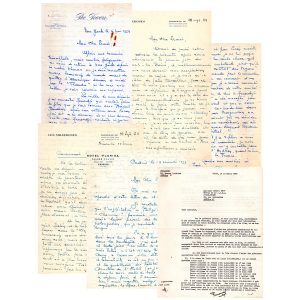 You're viewing: Correspondence and contract with producer Ernest Rapp. 2 500 €
Add to basket