Coulange regrets not having been able to accept the invitation to dinner from the Attorney General of Rouen, Louis-Charles Maignard de Bernières, Marquis de Beautot,". But my dear comrade, I am a mile away from the city, and it is an even greater affair to go there mainly at noon by the cruel heat that sweats us from morning to night than to leave a cardinal. [Cardinal de Bouillon, then in disgrace and dismissed from the Grand Chaplaincy] who seems very happy with my little company and who seemed to give me leave to go to Rouen, only because he wants to give me my freedom. I am therefore resolved to leave him at least as much as I can, and all the more so as I am beginning to reach my goal, since I have offered to stay with him.. I'd even be gone by now. […] more conveniently and honourably than I came...he wants me to rent an old coach and send it back to Paris, as soon as  the lucky ones who will take him there will be able to bring back a sedan that he's having made, and which from time to time, he waits for someone to tell him that it's in working order. […]. This uncertainty, therefore, at the time of my departure, made me take leave of all my good Norman people, from last Monday I dined at my little cousin's house in Lezeau, which I had brought up to date, and which has been an admirable help to me since then.. He's a very handsome man, he knows how to live, and that's to tell you all that the force of blood is so well felt in me that I... and that I took him completely into my protection he gave me the best breakfast in the world, and the best air, and knew very well  by sorting out the company that would suit me best:  It was Mignonnette, it was Mr and Mrs Garnetot, Madam the president of Bernières, the sister-in-law of Made de Lezeau, his own wife, the abbot of Antreaille, and his adviser of the parliament, man of the world whose name I have forgotten, the Marquis de la Londe and lieutenant were also to be present at this meal, they were requested, but one had found himself obliged to go to a hunting party, and the other to Forges to visit Madame de Pont Charevain there. […] The meal was very gay, we sang to the envy of Madame de Granetot and myself, and everyone had his supporters, as it happens quite usually, after a long table and a short digestion, everyone took his side, my cousin took me to the Public Prosecutor, as I have already said, then to the First President and President of Malbueille, whom I hadn't seen since their dinner, and I finished with the course, which is in my opinion one of the most beautiful walks that one can take.. […] I forgot in my first letter, it is true, to tell you about the Abbé de l'Épine, who is always the flower of the weights, he came here after dinner, I also saw him after dinner at Monsieur de Courson's where he did not want to come to dinner, and I had dinner with him only once at Madame de Motfeuille's, that is all I saw my dear godson, who still seems to me a  not very affable, but no less good company.
[…] Tell Mademoiselle de Rys, I beg you, that I have as much reverence for her friend as if she had not been whipped at the age of seventeen. I am convinced that she has even become wiser by having a more recent memory of it, but it is a fine reward that five hundred thousand francs they say she will get for her share, for as long as she looks for an eel, she will easily find it....I believe that Madame de Coulange is there for me at the moment, I will never be as strong as I want to be, but I beg you, my dear comrade, that you be there at the same time, I am not as good company as Abbé de Langlée and Abbé Morel to pay for my spirit and my play, but at least I will speak to you in Norman, and this language may not be indifferent to you. […] Alas, I can see that I will return to Paris without seeing the procession of the League, but I will console myself by seeing you, my dear comrade, and by repeating to you that I am the man of the world who most honours you, your humble and most obedient servant.
A thousand compliments
Coulanges."

Two sheets folded in two, a period tear linked to the opening of the wax seal. 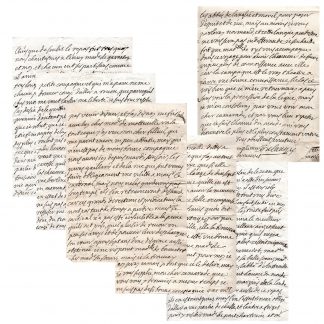