[…]  So I knew that Mollion was no longer in the same place or at the same job in this vast dance hall that is our "ORTF"!

It was only a short time ago that I had sent Mollion (I had telephoned him on the subject) my adaptation of the "Ramayana", the Hindu epic that you may or may not know, because very few people have been able to get the text in front of their eyes. I had it, in short, in the good times of my tender youth, and at that time, I had begun to make something in verse, which has disappeared (I was 19 or 20 years old!). […]

[…] The book that I finally found in Paris, on my last trip, includes 3 volumes of 600 pages each = so it was a question of reducing this mass, and Mollion agreed for 3 issues of 40' as I just told you.[…]

[…] I'm throwing out the parcel of books you asked me for (addressed to France Culture in your name). Needless to say that they are precious volumes because the only ones I have been able to keep (part Already Once) because of the war. Missing the Peruvian Executioner but it's in good shape at Gallimard. On the other hand, you might find the right leaves for the volume of poems that will come out at the end of this month at sehguers (Poets of today). […]

[…] This morning I received a request for information from Mr. L. Fourbet (Direct. de la Radiodif.) concerning my Ramayana. But in reality the title is = Good and Evil, 3 Episode from the Ramanaya. While the request I have just answered concerns by name Good and evil, without mentioning the Ramayana. […]

- Undated letter [June 1967]written by Saint-Jeannet Alpes-Maritime, 3 pages half in-8,

[…] And obviously, I'd like to see that accepted. For reasons you guessed it. 83 years in a few days, and still fighting for sustenance on this noble Earth... hmm! It's beginning to get boring. […]

[…] I realize I haven't told you what it's all about, about my emissions project. It's about local stories from the various countries of Provence, stories that are more or less diabolical, traditional, treated in a pleasant way, not at all in the style of the small Côte d'Azur show Insolite.[…] 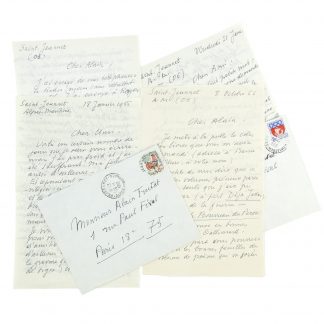