COMPLETE ORIGINAL EDITION IN THREE VOLUMES.
ONE OF THE 50 EXAMPLES ON PURE WIRE, the only large paper print.
Autographs signed on the first two volumes

COMPLETE ORIGINAL EDITION IN THREE VOLUMES published from 1951 to 1953.

ONE OF THE 50 COPIES ON PURE THREAD, only large paper.

Philosopher, resistant, member of the Hand to the feather, founder of Eighty-one sheets and then from  The future of surrealism,  André Stil began his literary career under the patronage of Aragon. The first shock, sound his first novel received the Stalin Prize and made him immensely famous. Andrei Stil was the first non-Russian author to be distinguished in this way by what was then called "the Nobel of the East" and was translated all over the world. The writing of the novel was also marked by stays in prison, as were his editorials in l'Humanité, a two-month stay in May-June 1952 and another six-month stay the following year, so that it was in Fresnes that he finished writing his cycle of novels. Aragon defended him in a text with a resounding title, Today's Egmont is called André Stil.text taken up and completed in Mr. Duval's Nephew (EFR, 1953).

Resistance fighter and communist activist, Claude Souef was in charge of film clubs after the war and had worked for La Nouvelle Critique, before directing a few short films. Assistant director at the ORTF, he worked with the pioneers of public television. He then devoted himself to writing a book on youth in the Resistance and his last struggle was to support undocumented workers. 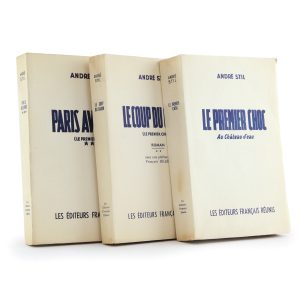 You're viewing: The First Shock 250 €
Add to basket