FIRST EDITION.
ONE OF THE 47 FIRST numbered EXAMPLES on light green paper.

In 1925, appointed manager of the delegation of the Republic in Bangkok, Morand joined Siam via the United States, Canada, Japan and China. The story of Morand's first real round-the-world tour was published the following year under the title Nothing but Earth. 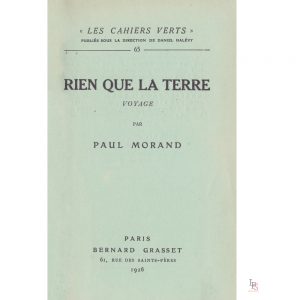 You're viewing: Nothing but earth 450 €
Add to basket