Memoirs of the Devil

Third edition mention on the titles of the first two volumes.

Masterpiece by the author, Memoirs of the Devil were considered in their time as a major title, equal to those of the great 19th century soap operas such as The Mystery of Paris of Eugene Sue, The Three Musketeers of Alexandre Dumas, or The Human Comedy of Honoré de Balzac. The text appeared for the first time in the Debate Journal in the form of soap operas in 1837, arousing Balzac's jealousy, who replied by Splendours and Miseries of the courtesans. Then it was gradually published in eight volumes until March 1838 by Ambroise Dupont.

Like Faust, Baron François-Armand de Luizzi sells his soul to the devil against the satisfaction of all his desires and will only escape damnation if he proves to himself that he has known happiness. Soulié paints, through deceptive characters exuding goodness and innocence, a picture of society at its most hideous and atrocious: crime, incest, adultery, falsity.

BEAUTIFUL COPY LUXURIOUSLY BOUND AT THE TIME, COMING FROM THE LIBRARY OF LA ROCHEFOUCAULT  and bearing on the titles the stamps of Château le Roche-Guyon. 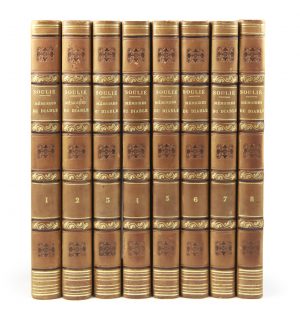