ONE OF THE FIRST 62 COPIES ON MADAGASCAR.

FIRST EDITION.
ONE OF THE 62 FIRST EXAMPLES on Madagascar.

The copy contains TWO SELF-READING SENDINGS signed by the author:

- The first contemporary of the publication, whose addressee has been carefully erased, is accompanied by THREE ORIGINAL DRAWINGS of small cats.

After two stays in Indochina, one to steal Khmer status (not without going to prison), the other to fight social injustice, André Malraux begins a series of novels whose theme is the Far East. The Conquerorshis first novel, was to be entitled Powerbut Jean Paulhan talked him out of it. Appeared in the Nouvelle Revue FrançaiseThe success of volume publishing shelters its author and launches him into a long literary career. Next The Royal Way  and The Human ConditionThe Goncourt prize in 1933. 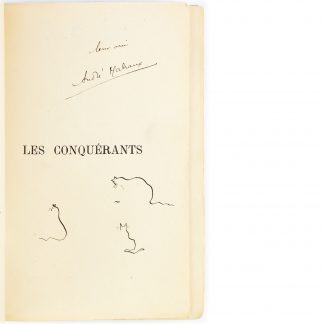