COPY OF JULIA ALPHONSE DAUDET DEDICATEE OF THE BOOKwet stamp ex-libris in black.

"Pending another copy and with indulgence...
for the faults which are numerous
Edmond de Goncourt"

The first work written without the collaboration of his brother Jules, who died in 1870, this "...".artist's portrait in acrobatics"is also considered the founder of"artistic writing"a phrase coined by Edmond de Goncourt in his preface, and prefigures The Manifesto of the Five published eight years later.

The author organized a reading of the manuscript in his study in Auteuil in front of Zola, Tourguéniev, Charpentier and Daudet, who wrote a report at La Revue de France on March 15, 1879.

The book dedicated to "Mrs. Alphonse Daudet"It was quickly sent to the dedicatee (without even waiting for the luxury prints to be printed), the latter having requested it in a letter dated 11 March. Edmond probably wanted to give the critics plenty of time to express themselves. Julia Daudet
wrote a touching article, under the pseudonym Karl Steen, in the Official Gazette of June 3, 1879.
On June 11, 1879, Goncourt thanked her: "I didn't thank you at first for your friendly article, because I was hoping to have dinner with you at the Carpenters'... [...] Your article, dear lady, is a very charming, poetic, moving analysis of my Zemganno and avenges me a little of the series of errands that fell on their backs."

The book had indeed received a few bad articles, notably that of Barbey d'Aurevilly in The Constitutional of May 12, 1879. Edmond de Goncourt, who made no secret of his contempt for literary women, was full of praise for Julia Daudet; she alone had "surprised their process, took apart their handwriting". Much later in 1910, in his Souvenirs around a literary groupJulia Daudet will write about the Zemganno Brothers: "it's a monument of brotherly love and the story of the Goncourt collaboration shattered by the death of the youngest". 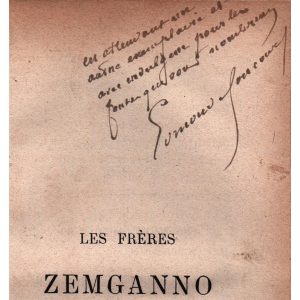 You're viewing: The Zemganno brothers 1 000 €
Add to basket