Beautiful edition of the author's most famous poems.

Each poem is finely illustrated with a large heading, a letter and a cul de lampe by Hippolyte Lavoignat, César Auguste Hébert, Louis Marckl and Laisne.

The first Messéniennes : Waterloo and The Malheurs war were published after the defeat at Waterloo in July 1815. Delavigne became a national poet by declaring himself against the victor; a poet of the fatherland who protested against the unpunished exactions of museum looters:

"Muses, bend your heads down;
From the century of Leon the divine masterpieces
Under a cloudless sky, the cold Germans will follow;
Albion's ships are waiting for our statues.
Inhuman desecrators
Will they wipe out so many old watches?
Will they put the iron on the living canvases...
Which Raphael animated with his hands?"
(From the Museum)

In 1821, thanks to the Duke of Orléans, Delavigne was appointed librarian of the Palais-Royal and became a member of the Académie Française in 1825. Genius of the 19th century, admired by Balzac, who was inspired by his Sicilian Vespers, Delavigne is today known to few and unknown to many.

A fine, almost freckles-free and well-bound copy in finely gilt aubergine half calf. 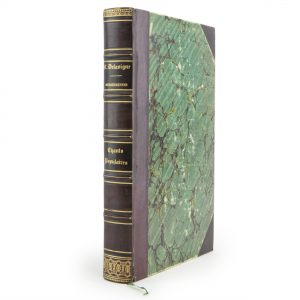