The soldier Jesus Christ must never lay down his arms; the time will come.

Beautiful letter on sin referring to the dogma of the Immaculate Conception.

BEAUTIFUL LETTER ON SIN REFERRING TO THE DOGMA OF THE IMMACULATE CONCEPTION.

"Rings 20 December '92
I arrived yesterday happily despite the weather, thank God. Before my departure I wrote the letter that Madame de Lusanci will show you: it is not bad to tell Madame de la Prieure the substance of it.
What is said of Monsieur de la Trappe, of the continual attention one must have to God's judgments, is true for the ordinary, but not universally; and he himself does not hear it otherwise. Besides, whoever desires to see God, fears to lose him; but this fear does not bring him down, nor discourage him because he knows that he is good, and surrenders himself to him.
Believe me, you are giving too much in these sentences, I assure you that they should not prevent you from communicating without confessing. I don't need to decide whether there's sin or not. Speaking frankly, I think I can assure you that there is none; but, in any case, I assure you that there is no obligation to confess, and that you would do better not to do so. You don't know how good God is, and what abandonment of everything can do to him.
I strongly approve of Mr. De Sainte-Beuve's sentiment, and you may rest on it; but I believe the way I am showing you is more in keeping with your present state. His feeling and mine are one in substance, and we are going in the same direction.
I see more or less what this preacher meant, and I wish we weren't so assertive in things where the Church hasn't spoken. The one who taught Saint Paul that strength is perfected in weakness and that temptation gives opportunity for advancement, can alone make you hear that the pains you are going through can help to purify your heart.
Everything that has been said about you in Paris, about your obedience to me, increases the crown you must expect for this action. The world speaks and judges without knowing; but Jesus Christ has judged it and has broken all its judgments beforehand.
Encourage the Prioress not to leave no matter what happens. Lhe soldier Jesus Christ must never lay down his arms; the time will come.... I'm with you with all my heart.
J. Benigne de Meaux"

Marie-Henriette-Thérèse d'Albert de Luynes (1647-1699) : daughter of Charles-Louis d'Albert second Duke of Luynes, favourite of King Louis XIII, and Marie Seguier his first wife. Raised in Port-Royal with Marie Louise de Luynes, his elder sister, they both made profession in Jouarre Abbey. Jacques Benigne Bossuet, then a simple ecclesiastic, made the sermon of his profession of vows on the 8th but 1664. He also composed the Discourse on the life hidden in God for Louise de Luynes. Their father, who was close to the Solitaires de Port Royal, had a castle built at Vaumurier, on land belonging to the abbey, where he received Blaise Pascal or Jean Racine. Marie-Louise de Luynes and then her sister were appointed to the priory of Torcy. Mme d'Albert died there "suddenly in appearance" on February 4, 1699, as described by Bossuet in the epitaph he dedicated to her: 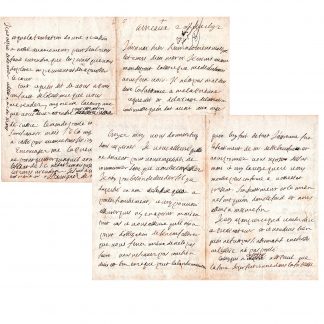