The Hymns of all Solemnities

From erudite libertine to religious poetry

A fourth copy of Tristan L'Hermite's French Hymns, with an unknown notebook for the litanies.

The Hymns of all the Solemnities, Translated into Verse, by F. Tristan L'Hermite. Dedicate to Monsignor the Chancellor [Seguier]. In: The Spiritual Exercises that teach the Christian the true way to pray well to God. With the offices of the Church, & of the Blessed Virgin, for all the Times of the Year. In Latin & in Francis.

Original edition of the Hymns Christian women of Tristan The Hermit.

This is the translation into French verse (with Latin text opposite) of forty-three liturgical hymns, published here for the first time, ten years after the poet's death, by this François Colletet (1628-v. 1680) whose father, Guillaume Colletet (1598-1659), had shared with Tristan L'Hermite a taste for poetry, erudite libertinage and Théophile de Viau.

The Hymns interpreted by Tristan, duly announced on the title page, occupy pages 528 to 624 of the volume and are placed after Ignacians Spiritual Exercises composed by an anonymous Jesuit father (perhaps Claude Texier, 1611-1687). The epistle dedicated to Pierre Séguier, the last protector and patron of Tristan L'Hermite, contains a laudatory portrait of the author of the Disgraced page and Heroic verses, whom the chancellor held in high esteem and who obtained his academic chair in 1647.

The illustration consists of 6 beautiful figures (including a frontispiece) engraved on copper by Herman Weyen (1638-1669), an engraver and publisher of Dutch origin based in Paris and specialised in the publication of devotional images.

These engravings, captioned in Latin, are signed "Herman Weyen excuses."four of them have a mention of privilege, in French or Latin. It should be noted that the other three known copies of the ExercisesThe images are not six but seven figures, engraved by other artists or unsigned: these images differ from one copy to the next, suggesting the hypothesis of an "à la carte" illustration according to demand and availability.

A singular manual of counter-reformist piety, between devotion and poetry.

The Hymns of 1665 remained unknown for nearly three centuries until the appearance, in 1957, of a copy of the Spiritual Exercises on the antiquarian book market. Since then, two other copies have been discovered: one in 1976 (acquired like the previous one by the BnF), the other in 1992 (exhibited at the Bibliothèque Mazarine in 2001 and still in private hands today). The exhumation of this small corpus represents, for the evaluation of the work of Tristan L'Hermite, "an appreciable contribution, an unexpected addition of about a thousand verses which, added to those of theOffice of the Blessed Virgin (1646), lead us to wonder about the religious orientation of some of his last collections" (Marcel Israel).

That a writer close to the libertines, an admirer of the rider Marino, having turned to religious poetry at the end of his life, is surprising. Time, wisdom and politics seem to have overcome the amiable daring of the Disgraced page. But Jean-Pierre Chauveau is right to point out that, far from being a proselytizer, Tristan has used, in his religious translations, ". his talent as a poet or, more modestly, as a craftsman of verse at the service of the enterprise of edification of the faithful which, in the perspective of the Counter-Reformation (...) is founded on personal and private devotion, and the education, in the course of the days and the liturgical year, of prayer, the sense of penance and the examination of conscience. Thus, as the century progressed, the use of the breviary and the Book of Hours became more and more popular, with translations and adaptations into French (verse and prose)..

A genre in which Lemaistre de Sacy, Corneille and Racine, among others, will be featured. Without forgetting La Fontaine who, in his last days - unknowingly imitating Tristan, whose influence he had been influenced in his youth - worked at translating the hymns of the liturgy into French.

A devotional treatise enriched with verses or a prestigious "tristanian" publication augmented with spiritual exercises? The publisher, Loyson, plays, as Mr. Israël has seen, on both sides, his tactic and that of François Colletet consisting "in betting simultaneously and separately on one and the other work". Colletet's epistle, for its part, is "a precious document. And what makes it so valuable is the light it sheds, not on the person of Tristan, but on the extraordinary favour that Séguier even posthumously lavished on him".

Noting the inconsistencies between the undated approval (identical to the approval of theOfficeof 1646 and mentioning only Tristan), the privilege of December 24, 1663 (granted for the third edition of theOffice) and the completion of printing (28 February 1665), Mr. Israel tried to clarify the process of publication of the Hymns.

Beginning in 1648," he writes, "J.-B. Loyson gradually became Tristan's official publisher. In 1653, the poet gave him the unsold copies of The Office of the Blessed Virgin (printed in 1646), which will be given a new title (The Hours dedicated to the Blessed Virgin Mary) while displaying the name of the new editor. Probably it was in the summer of 1655 that Tristan, who was about to disappear, gave or had given to his publisher the last verses in his possession, including the manuscript of hymns still unpublished. One of the reasons for the delay in publication may have been the design of the book itself. The forty or so hymns translated by Tristan, none of which are very long, and several of which are very short, amounted to only a hundred pages at best... (...) Was it not desirable to expand the volume by incorporating other works of religious inspiration? This is the formula that prevailed, but it is understandable that it was only imposed after much prevarication. All the more reason why the choice of 'complementary' texts could have led to hesitations and delays.

This copy, the fourth known and one of the two in private hands, contains an additional notebook which seems to have escaped the bibliographers.

These eight sheets contain, on 16 pages, the text of the Litanies of the name of Jesus, the Blessed Sacrament and the Virgin; the Latin text and the French version - of which we do not know whether it is due to Tristan's pen or that of another translator - are printed on two columns. If the pagination and the signatures follow without interruption on from those of the Exercises and Hymns, the text is printed in a smaller typeface than that used throughout the book (but the typographical material seems to be Loyson's). In addition, the word "End" appears twice: on page 624 (end of the Hymns) and on page 640 (end of Litanies). Finally, the typography is less neat than the sumptuous typography of the Exercisesand Hymns.

Far from claiming to put the finishing touches to this little bibliographical enigma, let us content ourselves with recalling that an important event had just marked, in the spring of 1664, the history of the very slow elaboration of the dogma of the Immaculate Conception and the debate on the use of unscriptural devotional texts in the liturgy. By the constitution In Supremo (May 28, 1664), Pope Alexander VII prohibited publishers from making any changes or paraphrases to the supplications, derived from a long popular tradition, known as litanies, especially those addressed to the Virgin Mary.

Therefore, it is not absurd to think that Loyson, anxious to respect the papal prohibition while circumventing it, was able to print separately (with pagination and signatures followed) the book of the Litanies to attach it, at the request of the devotees, to copies of the Exercises from 1665. Going a little further, one could even imagine - but this remains to be verified - that the same notebook could have been used to "complete" copies of the third edition of theOffice of the Blessed Virgin, also published by Loyson, which contains a title dated 1664, completed printing it on December 31, 1663, and, after the 4 preliminary sheets, 624 pages as in these Exercises.

These verses, writes Stéphan Bouttet, "While the jea makes way for us and one would expect a monotonous celebration, Tristan multiplies the variations, the echoes of his own production, in counterpoint to his last encomiastic verses, and does not pale in comparison to Lemaistre de Sacy, Corneille or Racine. Tristan's Christian verses are therefore as important a whole as his other collections.

16 ff.n.ch. (for title, epistle, table, approval, privilege, privilege, the Table to find the Mobile Pets,theChristian Reflections on the Conduct of Lifeand the calendar), 640 pp. (pp. 625-640 with continuous pagination and signature, but composed in a smaller body than the rest of the work), and 6 plates engraved out of text; black morocco, spine blank with nerves, compartments decorated with corner irons, friezes at the head and foot, plates framed à la Duseuil, gilt edges (bookbinding of the time).

Skillfully restored at the binding; the missing flyleaves have been replaced with old comb paper (the counterguards are original); the lower margin of the Rr leaves1and Rr2(Litanies) has been cut diagonally (7 x 70 mm); small tear in the outer margin of the Rr2some stings, very scattered and not very pronounced.

(Château du Solier near Janaillat in the Marche: 1601 - , Paris: 7 September 1655), French gentleman, poet, playwright and novelist. First page in the entourage of Henri de Bourbon-Verneuil, natural son of King Henri IV, then swordsman in the service of Louis XIII and his brother Gaston, Duke of Orleans.

Author of five tragedies, a tragi-comedy, a comedy and a pastoral, five collections of gallant, heroic and religious verses, a novel and Lettres mêlées, Tristan approaches all genres. The publication of Acante ComplaintsIn 1633, he was revealed as the successor to Malherbe and Théophile de Viau in the field of love, elegiac and lyrical poetry. His first play was successful in 1636, La MarianeIn the film, the actor Montdory caused a sensation before playing Le Cid, and established him as one of the best playwrights around Corneille.

A member of the Académie française in 1649, Tristan accompanied the beginnings of Molière's Illustre Théâtre, and gave Madeleine Béjart great success in The Death of Seneca. He also protects Quinault, whose career he encourages by proposing the first elements of copyright. 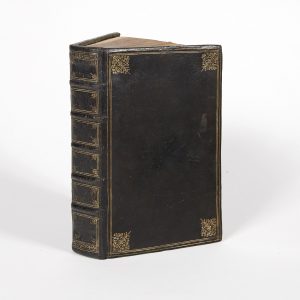 You're viewing: The Hymns of all Solemnities 9 000 €
Add to basket