About the radio adaptation of The Immortal. . .which was to follow the making of the 1963 film of the same name. . :

Dear Sir,
Forgive me for not yet having answered your kind letters...
June 2 and July 27. The film I'm just finishing has given me a lot
and I'm not as far along as I had hoped in developing this radio show project for the new school year. May I submit the manuscript
a little later, or are there deadlines for this order?
Anyway, I am working on the project, which I am passionate about, and I hope to give you some news soon.
Your devoted, Alain Robbe-Grillet "

One sheet, trace of shipping documents. 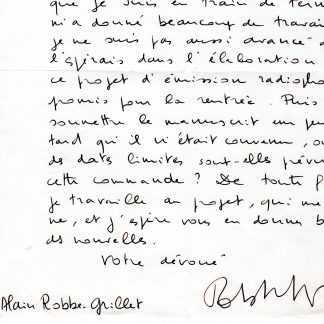