The Real and its Double

SIGNED AUTOGRAPHIC MANUSCRIPT entitled The Real and his Ganger.

Unpublished text, written for a radio program devoted to writers' interpretation of reality. The program follows Ribemont-Dessaignes' thesis and readings that illustrate it: André Breton, Discourse on the Little Reality; Herman Melville, Moby-Dick; Raymond Roussel, Impression of Africa, View and Isidore Ducasse, The Songs of Maldoror.

"The human situation in the world is all the more complicated because if you shudder when we realize our impossibility of knowing what is real, we willingly give the change by seeking, sadly enough sometimes, to reveal to our fellow man precisely all these strangeness, all these echoes, all these strange, unusual, even fantastic perspectives that the study of reality reveals. But this time, no longer coldly and in a scientific spirit, but by giving a sort of living personality, avowed and voluntary, to all these strangeness and fantasies. That is to say, art, poetry and literature are giving them a good run for their money. Reasonable, quiet, carefree people are then far from believing that it is precisely these manifestations of the mind that come closest to real knowledge. But we're not going to argue about that. The essential thing for us is to travel to this land of the strange and the unusual, and to consider there without new worries those manifestations of anxiety invigorated by the art of language and thought.

We use the word "travel" deliberately. In fact, it is always a kind of journey that we are talking about, a journey that introduces us more deeply into reality, or if we want, on the contrary, in the fear of reality of the beings that we speak of a rather monstrous anthropomorphism, or if we want, that we endow with a life analogous to our own. Instead of travelling through geographical landscapes, we travel through the lives of animals, plants... or even objects created by man and, if necessary, inanimate objects that we pretend to believe are animate. […]"

"A very strange and sinister show where signs of tragic agreement between the inner reality of men and the reality of the world of which he is a part appear and disappear. But with Melville the man commits himself entirely. There is a great duel between being and being, in which the inanimate himself comes to life and seems to possess a soul. Illusion of illusions!

However, it also happens that a poet, a writer, an artist does not fight in this way. He remains without passion. He keeps a cold resolution to recreate a reality as he pleases. The appearances of his creation remain realistic, but they do not work according to common sense. And this is how one finds oneself in a very unusual universe in which everything is unexpected, and somewhat demented. We look, we see, we don't understand very well what's going on anymore.

This is the case, for example, with the disparate and constantly renewed universe created by a writer who must be believed to have been born at the beginning of the twentieth century, although it is more appropriate to situate him outside any past or future century. This is Raymond Roussel. A wealthy man, who was able to have his novels published, such as Impressions d'Afrique, his poems like La Vue and Nouvelles Impressions d'Afrique, and his plays like Locus Solus, Poussières de Soleil; he provoked, at the appearance of each of his works, a violent scandal to which the avant-garde movements soon retaliated by shouting genius, while others called him mad. Crazy because his reasoning found a way in a classical movement to penetrate into a very singular world where conventional reason revolts, but where the intuition of the mind discovers very disturbing and marvellous horizons. […]" 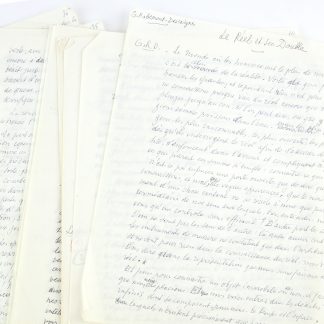