FIRST EDITION without a big-paper print.
A copy of the complete press service of the bright red dust jacket with a short biography of the author.

The author's second book, after Aux frontières de l'Union Française, La Chine au défi was written after a study trip to China, in which François Mitterrand met with the main leaders of Beijing, in particular Mao Tse Toung.

The writer of La Bresse mâconnaise, Raymond Dumay (1916-1999) was particularly appreciated by François Mitterrand, from whom he sometimes quoted passages during his travels in the Mâcon region.

Clear trace of wetness on the first two sheets and at the top of the first cover plate. Back of the jacket faded. 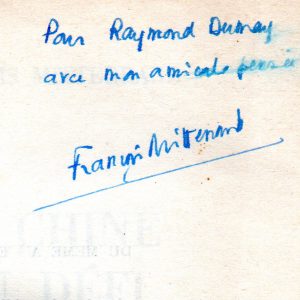