Abandoned at birth by his mother, Jean Genet was placed in a family in the Morvan. A thief from an early age, he experiences his first homosexual emotions, the founding elements of the Genet myth. From his adolescence he begins a marginal and rebellious existence, passing through the penal colony of Métray, the Foreign Legion and prison on several occasions. It was in Fresnes that he began his first work, in 1942, The death row inmate. Several autobiographical novels will follow:
Our Lady of Flowers (1944), Miracle of the rose (1946), Brest Quarrel (1947), Funeral Home (1947). These first novels judged pornographic are censored and without the support of Jean Cocteau and Jean-Paul Sartre, Genet would probably have remained in the shadows and in prison for life. From 1947, Genet devotes himself to the theatre: The maids (1947), High surveillance (1949), Negroes (1959), Screens (1961). Co-founder with Michel Foucault of the observatory of prisons, takes sides with the Algerian independentists, commits himself to the Black Panthers and the Palestinians writing The captive in love (1986) and The declared enemy (posth. 1991)
In 1983 he was awarded the Grand Prix national des lettres, and is today one of the most frequently performed playwrights in the French repertoire. 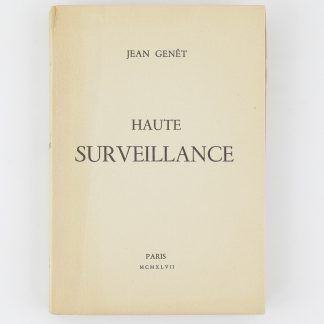