FIRST EDITION.
ONE OF 125 NUMBERED COPIES ON PURE LAFUMA-STRIP VELLUM.

ONE OF 125 NUMBERED COPIES ON PURE LAFUMA-STRIP VELLUM, only large paper print.

Activist for the National Liberation Front Algerian Djamila Boupacha, born on 9 February 1938 in Bologhine, was arrested in 1960 for an attempted attack in Algiers. After confessing through rape and torture, she was sentenced to death on 28 June 1961. With the help of Gisèle Halimi and Simone de Beauvoir, the trial received a lot of media coverage and called into question the methods of the French army in French Algeria.

Small stains on the first course. Good condition inside. 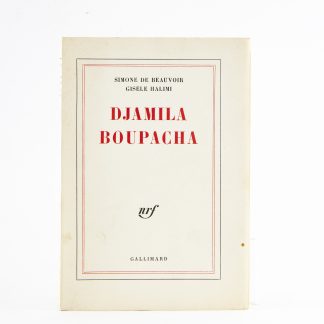