- 7 letters are addressed to the historian and bibliographer Louis-Raymond Lefèvre and deal with the work of t'Sertevens as a writer, inspiration, writing, publishing...

- 4 are addressed to a couple very close to the author, Joachim and Marcelle (Lefèvre?). Two long missives, dating from the summer of 1924, deal with a virulent scramble about a holiday home in which t'Serstevens had done important work. The last letter, written from Tahiti in 1949, shows a peaceful writer, very detached from the literary world and fond of travelling.

"Your letter is dear to me gives me the greatest pleasure. I'd be wrong, wouldn't I? To conceal in conventional phrases the joy I feel in feeling that my work and my material selflessness still bring me a moral reward and that I am beginning to have unknown friends. But don't talk to me too much about ideals. It is a point that we reach only by chance, provided that we do not seek it. I have often told myself this when I studied the works of Duccio, who was the most important painter in Tuscany, in Siena: he makes masterpieces and mediocre ones with the same unconsciousness. Certainly, when he created this sublime Descent from the Cross, the photograph of which I will show you one day, he was absolutely unaware of the incomparable value of his work and perhaps preferred his Herod, who is worthless. Moreover, not being religious or monks, we do not have the harsh and tenacious life of today against us. We sometimes have to write things - apart from books, which is our ritual - that we would perhaps not write if we did not get from them enough to write in peace the pages we love. At least that is my case, being poor and having only my pen to live by. So you must forgive me for a few pages that will never appear in volume; I try to get by in style, good humour and badness. It is obviously those pages of my hand that the public prefers. Unfortunately, they cost me a considerable amount of time, up to 20 and 30 hours of work, because I give them no less care than I give to the ones I love and that I write in all piety.
[…]  An apostolate which has just been published in the Revue de Paris, will come out in a volume in September, published by Albin Michel. I will publish the same me, with Camille Bloch, "Les Petites Trilogie", a collection of prose poems that have appeared left and right. I will have great pleasure in sending you both volumes, with a reminder of my friendship. […]

-Signed autograph letter, Wednesday night, one and a half pages in-8 :

I've been back for a few days and I'm already caught up in the literary world. This morning I dedicated and sent you the dedication and the dispatch of An Apostolate which you will soon receive. It's a book I'm counting on a lot. Written at the same time as The Seven from January 1913, it differs totally from The Seven in style, setting and method. This antithesis - I do not need to tell you - is intentional, all the more so since they are two books written at the same time. I hope to show by this what can be achieved by will carried in different directions at the same time. An Apostolate is, moreover, only another side of the problem of the Seven, the individual against society. But here it is society that triumphs, while in the Seven it is the individual that triumphs. […]

"In the midst of the articles that I have received from "An Apostolate", which are always kind but not always understanding, I am pleased to reread yours, my dear friend, and all that is contained in it, which is nice and well read. For there is no greater way for a writer whose weakness is to philosophize a little, than to feel understood as my book is not understood by you. Your conclusion especially "In the Seven the individual triumphed. But next to society and not against it! Marcel sings above all "I killed my love for man", Pascal could say: "The Man killed my love for him". That is the moral difference between the two books, and you are my dear friend, the first to see it. […]
I was also very moved by what you said at the beginning of your beautiful study. We will find ourselves on the field of distress, because that is obviously where the whole book started from. […]

- Your article has been close to my heart, my dear yes, because you are a true poet, with the sensitivity and the means to express it, and I am happy that my little book has been the occasion of very beautiful poems that you give us in the form of criticism. Of course, my prose poems will never be spoken of with the indispensable grace you have put into them! I say indispensable because I like silence better than a form different from yours. Also, let it be said that hardly anyone is capable of discerning poetry from French prose, and all that it contains of delicious music, so that never was a more perfect instrument given to an artist. Really, I liked the minutes that followed the completion of these little pieces, some of which cost me weeks of work (La Sirène at 47 pages of draft) and perhaps there is more of myself in it than in anything else I've written [...].

I'm very  touched, my dear friend, by the beautiful article you devoted to me about my soliloquies. This goes, you think, beyond the satisfaction of self-esteem, for the good or the bad that is said of me does not change the way of thinking that I have about myself, which is a complete ataraxy. I am, as far as I am concerned, more pyrrhonian than Trouillogan himself. It is thus, as you so aptly put it, that I have found peace.
But I am touched much more keenly by your friendship, which never loses an opportunity to express itself, and by the generosity of your spirit which leads you to know how to make a study of a 15-line poem as well as a 400-page novel. This is much more curious than you think. […]

For Joachim, My dear old man,
As we did not want to go back to Lerici anymore, because the land is beautiful to discover, we had to search miserably. I assure you that three or four times we almost went back to Paris: we never found what we were looking for. […] Well, we found, or to better say, Marcelle found, […]. It's a big palazzo, and we're occupying an entire floor. All around it is a garden of lemon trees, loaded like chandeliers. I think the paese has never seen a stranger. We have the most beautiful maid in the world, a seventeen-year-old ragazza, as fresh as an apricot and as blonde as flesh: it was also Marcelle who found her. My eyes thank her for it, because as for the rest, I have no intention of spoiling my stay by running around in a petticoat. I am content to watch this beautiful animal coloured by the sun, and with a slightly heavy grace, and I assure you that it is as delicious as if I were caressing it.

Give me, my dear Joachim, the credit for thinking that I only addressed to Marcelle the right share of the reproaches I had offered to make to her, and that I reserved a good part of them for you. Not having found you in Paris, I spoke of you only incidentally, proposing to take you to task when you returned. You're getting ahead of this meeting. There has been in your conduct towards us (as well as towards Marcelle Sch.) a series of little lies, reticence, hypocrisies, which I will never agree to put up with. If you had some reproaches to make to me, it is the simplest friendship to tell me about them: we are not perfect. Instead, it is astonishing what there have been of lost letters, overwhelming occupation, unfortunate setbacks, postal delays, I know! The whole plethora of little excuses has come into play. Finally, there is the Chaumettes affair, for which I hold you both responsible, for lack of knowing the real one. […]
I feel sorry for myself in the depths of my soul. It's miserable and petty bourgeois. It brings me back to considerations of a misanthropy that is in no way sickening but the result of some incursions into the Saharan field of friendship.
Since you want to "count for something", take your share of the blame.

I'm very glad I got you to drop the mask and tell me about the old grudge you had against me. […] It's a bit like the feeling Rousseau must have had for the Hermitage. You haven't understood it. You've been taken by some sort of panicky fear, as if I wanted to strip you of this property: it's this feeling that I have the right to call vile and petty bourgeois.... […]

[…] JOn January 26th, I finished the book on the islands, which at 900 machine pages. I worked on it for 9 months and a few short escapes in the Austral to Rapa and the atolls of the central Tuamotu, this last trip by cutter. Always with Amandine, of course, because she is a perfect traveller. It is quite amusing the destiny of this Parisian, born in Paris of a whole ancestry of Parisians from Paris, who had hardly ever left France (Balearic Islands, London) and who becomes a globetrotter at first sight, sailing on hooves, everywhere on horseback.  Moorea, the Marquesas, lives familiarly with the natives and goes to visit the cannibals of Malicolo. She is fortunate to have many more years to live to revel in incomparable memories. It is obvious that the encounter between the tropical world and the primitive races profoundly changes our way of looking at life. It is an unimaginable revelation and an indispensable complement to the understanding of the human being. It becomes impossible to consider as essential all the things that occupy the minds of people in Europe.. […]
I don't think I'm going back to Paris elated. I've become terribly detached from everything I own, including books. I'm going back because I have to, but it will only be to prepare for a new journey....[…]
T'se, said Tetvini Toato papa parau, it means Man who writes words, a beautiful definition of a writer. 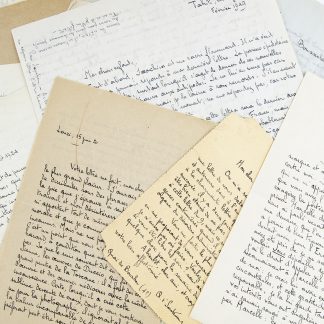