View basket “The echo of fantasies” has been added to your basket.

"Dear Comrade and friend, knowing that you have to go to the Soviet Union very soon, I would like to ask you to add one more item to the list.... I would like to ask you to intervene on behalf of a young Jewish woman who was sentenced at the end of 1970 to 10 years of hard labour for having tried, with a group of friends, to leave for Israel illegally. You surely remember the "Leningrad trial". This young woman, Silva Zalmanson, aged 30, is in Camp 3 in Potma in the Autonomous Republic of Mordavia. (sic) ...what we want is for him to be allowed to leave for Israel... You know how much the situation of the Jews in the Soviet Union means to us."

Sylva Zalmanson had attempted to hijack a Soviet plane with her husband and a group of friends. Their story led to a film: Operation wedding. They were heavily condemned. When Sylva Zalmanson was released from prison in August 1974, a few months after this letter, she was able to leave for Israel. This date marked a turning point in the history of Soviet Jewish emigration to Israel.

LETTERS FROM GOLDA MEIR TO PROMINENT PEOPLE ARE VERY RARE. 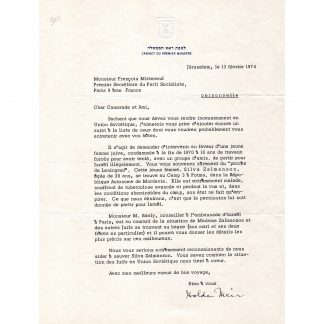 You're viewing: Letter signed to François Mitterrand 2 300 €
Add to basket