View basket “The Evangelist - Parisian novel” has been added to your basket.

RARE ORIGINAL EDITION OF THE CHARACTERS in contemporary bookbinding.

Theophrastus' Characters translated from Greek. With The Characters or Customs of this Century.

THREE STATES OF THE FIRST PRINT RUN ARE DESCRIBED BY BIBLIOGRAPHERS:

THIS COPY HAS ALL THE CHARACTERISTICS OF THE SECOND STATE. With 24 cartons, it's one of the last printouts of the very first known state.
(Detailed sheet on request)

Copy bound in calfskin, at the time, in a cover very close to the copy by Louis Barthou and Charles Exbrayat.
It was protected in the 1930s in a shirt case signed Szekely.

Ancient manuscript ex-libris on the title and the guards: Francissi de Belloÿ.

Full brown calf of the period, spine ribbed and decorated with gilt fleurons, gilt title, gilt roulette on the cups.

Restored top cap and corners, scratch marks on the dishes. 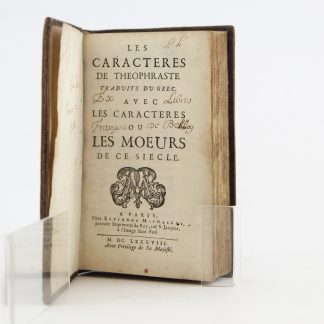