View basket “Two autograph letters signed to Theodore Wyzema” has been added to your basket.

Tuesday
Dear Mr. Postif
Have tried to get you my telephone, but failed.
For a very few days I am at the San Regis Hotel,
12 Jean Goujon Street.
Telephone Elysées, 25-76, 33-45
Sincerely
James Oliver Curwood.

Louis Positif became a translator after discovering a copy of White Fang from London during those years of captivity in Germany during World War I. He then translated much of London's work, Agatha Christie's and some twenty novels by James Curwood.

Laminated on a card stock with the calligraphic inscription: Autograph of James Oliver Curwood. 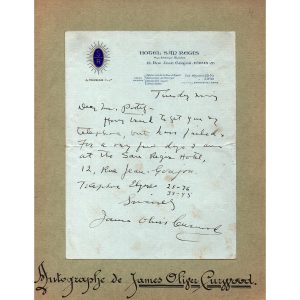 You're viewing: Autograph letter signed to his translator Louis Postif 200 €
Add to basket