View basket “Saints of Ramon de la Cruz” has been added to your basket.

"To Mr. Ch. Asselineau, the writer and bibliophile."

ORIGINAL FRENCH EDITION.
ONE OF THE FEW ON CHINA.
AUTOGRAPHICALLY SIGNED to Charles Asselineau.

ONE OF THE FEW ON CHINA.

"To Mr. Ch. Asselineau
to the writer and bibliophile
Ant. de Latour"

Famous writer from Madrid, prolific author of more than 540 works, Ramon de Cruz is above all the inventor of the form of the saintetes (farces) intended to be played at the end or at the intermission of longer pieces. He will write more than 300 of them depicting the Madrid of his time with great liveliness in the dialogues, he develops a satire of the middle class by parodying the tragedies.

Charles Asselineau (1820-1874), Charles Baudelaire's faithful friend and art critic, close to Nadar, was also a fine bibliographer and a learned bibliophile: "Asselineau loved books. He loved them as a man of letters, for substance, and as a bibliophile for form. The smallest pamphlet, well printed on choice paper, was for him an object of admiration." Léon Techner, Bulletin du Bibliophile, 1874.

Son of the publisher and bibliophile Jean-Baptiste Tenant de Latour (1779-1862), Antoine Tenant de Latour became, after studies at the École Normale (1826), tutor to the Duke of Montpensier (1832) and then his first secretary in 1843.

A man of letters and a poet, he publishes extensively. In love with Spain and its literature, he made many Spanish authors known through his essays and translations of Calderón de la Barca, Fernán Caballero, Juan de Mariana, Juan Díaz de Solís, Juan Eugenio Hartzenbusch, Ramón de la Cruz.

He was received on 9 May 1858 at the Real Academia de Buenas Letras in Seville. 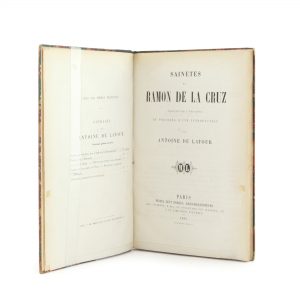