View basket “Memoirs of the Devil” has been added to your basket.

I have asked M. Phelipeaux to go and see you, although I do not know, my Daughter, what is desired of him; but his presence is always good at Jouarre, and I will be able to be written to freely.

I think you must be pleased about the attachment that some people fear for the taste of God. It is true that God sometimes hides it from the souls He wants to attract, and that He has a thousand ways of doing so. What obliges Him to do so is, among other things, the intention to prevent presumption, if a soul knew itself; and I cannot and must not conceal from you that your sorrows could be a cover for the graces which God gives you, which would not be useless if you were faithful to the divine attraction.
Be it then, and know that this fidelity consists principally in abandoning oneself to this attraction independently of any other view, and with the least possible return on oneself, because the effect of this attraction is not so much that the soul seeks to humiliate itself, but that it seeks to forget itself altogether by a celestial intoxication, which separates it from itself much more than any reflections it might make to humiliate itself would do; and this is the true bottom of humility, since one learns by this means to count oneself for nothing and, in a way, to be no more.
Our Lord be with you. My daughter...
J.Benigne de Meaux".

Marie-Henriette-Thérèse d'Albert de Luynes (1647-1699) : daughter of Charles-Louis d'Albert second Duke of Luynes, favourite of King Louis XIII, and Marie Seguier his first wife. Raised in Port-Royal with Marie Louise de Luynes, his elder sister, they both made profession in Jouarre Abbey. Jacques Benigne Bossuet, then a simple ecclesiastic, made the sermon of his profession of vows on the 8th but 1664. He also composed the Discourse on the hidden life in God for Louise de Luynes. Their father, close to the Solitaires de Port Royal, had a castle built at Vaumurier on land belonging to the abbey, where he received Blaise Pascal or Jean Racine. Marie-Louise de Luynes and then her sister were appointed to the priory of Torcy. Mme d'Albert died there "suddenly in appearance" on 4 February 1699, as described by Bossuet in the epitaph he dedicated to her: 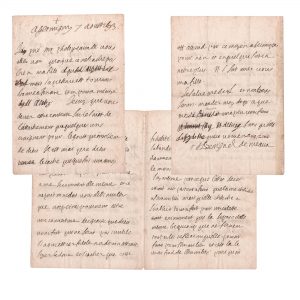