I received your letter of 24th from the parish priest of Saint-Jacques-du-Haut-Pas; the one I had the honor of writing to you in the Friday ordinary will give you a full explanation of my intentions. After that, there is nothing left to do but to tire of doing as you have begun, since you are getting so well into the matter. I still have no reply from Mr. De Blancey's package, where I thought I had put my letter for you, which I have received.

The funeral oration of the Princess of Conti is indeed a piece full of piety and eloquence: it was highly esteemed, and I know that the illustrious prelate who made it will be very comfortable that it be approved again at Court. Since you wish to have the one I made for Madame, I am sending a few copies for you to the parish priest of Santiago. You will see that the one for the mother and the daughter have been printed together. It will be my great pleasure to present them on my behalf to His Eminence Cardinal Sigismund, and to the R.P. Master of the Sacred Palace. If you judge that the present is agreeable to some others, you may do so even in my name; I leave this to your prudence.

I dare to ask you again for your care for our version. If you think, when things are resolved, that I should give some gifts of books or the like to the translator, and some honesty to the printers to encourage them to do well, you will please ask me to do so, and I think I have already told you this by my previous letter.. It only remains to tell you that Father de Montagu has made an English version of my Exhibition, which has already been printed: you can tell this to Father Irlandais, of whom you speak to me. We have already worked on the Latin here; I will see it again, and we will talk about it when the Italian is done.

I find it very appropriate to put the passages of Scripture in Latin. But do we use them in the same way of those we mix in the discourse, and those we quote expressly? I leave it to you to decide according to the custom of the country; but above all the accuracy in the version. I am with all my heart, your most humble and affectionate servant.

Doctor of Sorbonne, theologian François Diroys or Dirois (1625 - 1690) was a Catholic personality from the English Channel. He was a master of the Little Schools of Port-Royal, like his brothers Etienne and Pierre, and followed the theology courses of Father Louis Thomassin. He distanced himself from his friends in Port-Royal, polemic harshly with Antoine Arnauld and Pierre Nicole, and later became a doctor of the Sorbonne in 1666. He then became the theologian of the future Cardinal César d'Estrées, and accompanied him to Rome on several occasions where he met Gottfried Wilhelm Leibniz. He is the author of  Evidence and Prejudice for the Christian and Catholic Religion against False Religions and Atheism (1683). 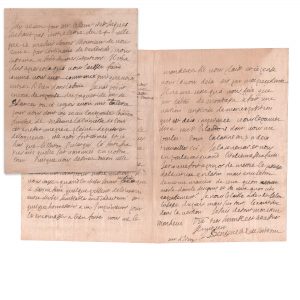