View basket “Les charmes de Londres” has been added to your basket.

Unpublished portrait of a photography pioneer

Born in April 1820, son of a printer and bookseller, Gaspard-Félix Tournachon alias Nadar, began working as a cartoonist and novelist for newspapers such as The Charivari. Close to members of the Parisian bohemian scene, Gérard de Nerval, Charles Baudelaire and Théodore de Banville, he switched from caricature to photography when his brother Adrien, who took photography lessons with Gustave Le Gray, opened a photography studio at 35 boulevard des Capucines.

After taking a few courses himself in 1854, he began photography as an amateur in his apartment at 113, rue Saint-Lazare. His first portraits of famous artists and writers date from this period. He temporarily interrupts this work in September when Adrien, whose studio is experiencing difficulties, asks him to join him.

But in January 1855, after a quarrel between the two brothers, Félix Nadar left his brother and opened his own commercial studio in the spring, producing portraits on salted mounted paper immediately recognizable by their 28 x 21 cm format.

This portrait of Yvan was made during Nadar's commercial beginnings.
Dated by Nadar in August 1855, this photograph has an elliptical shape similar to Berthelier's portrait of the same period in the Getty Museum collections.

The portrait has been enhanced in colour, which is particularly rare in Nadar's early works. We have been able to trace only one portrait from 1855 that was also enhanced, portrait of Henri Murger, (Collections of the Getty Museum).

This portrait does not appear in Nadar's archives, bought by the National Library of France, it has remained unknown to this day.

Finally, as Nadar's dedication indicates, Yvan was a friend [to my friend...but he hasn't been identified yet. A few hypotheses have been put forward about him, based on his costume: a circus artist, a profession that Nadar has often photographed? A foreigner dressed for the 1855 World's Fair?

Some rubbing and cracking, small lacks in the lower left part. 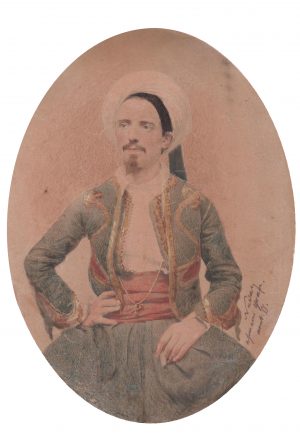